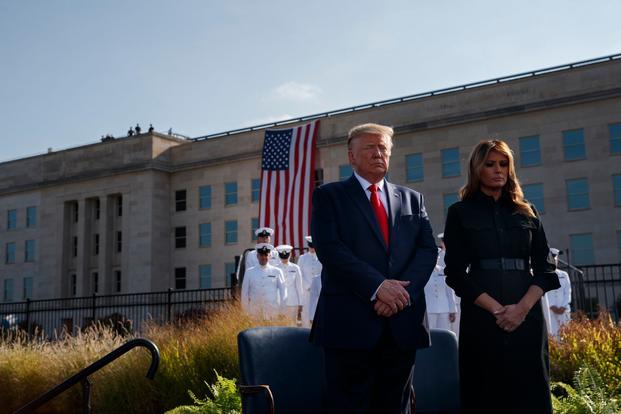 “President Donald Trump participated in somber memorial services on the 18th anniversary of the 9/11 attacks with first lady Melania Trump at his side,” Debra J. Saunders reports for the Las Vegas Journal-Review.

The White House flag flew at half-staff, while families of victims joined the First Couple on the South Lawn, facing the National Mall. “Trump led a moment of silence that began at 8:46 a.m., the moment the first plane, American Airlines Flight 11, struck the North Tower of the World Trade Center in New York City on Sept. 11, 2001.”

After the ceremony, President Trump traveled to the Pentagon to give remarks.

President Trump leads moment of silence for September 11 victims Eighteen years ago, America and the world were forever changed. Confronted by a series of cowardly acts of terror, the United States once again demonstrated to the world the unmatched strength of our resolve and the indomitable power of our character.

This morning, President Donald J. Trump and First Lady Melania Trump—along with Americans all across our country—honored and mourned the nearly 3,000 lives we lost.

On the South Lawn of the White House, the President and First Lady led a moment of silence beginning at 8:46 a.m.—the exact time when the first plane struck the North Tower of the World Trade Center. They were joined by families of victims from that day, looking out onto the National Mall as the White House flag flew at half-staff behind them.

Shortly after, the First Couple traveled to Arlington, Virginia, where the President spoke at the September 11th Pentagon Observance Ceremony. Addressing both victims’ families and members of our Armed Services, he explained how this day is seared into the soul of every American who lived through it. For President Trump, the day carries particular significance, as he witnessed the events in New York as a resident of the city.

“I vividly remember when I first heard the news,” he said, adding that he was looking out a Midtown Manhattan window when he watched the second plane crash into the World Trade Center. Soon after, like many other New Yorkers, he went down to Ground Zero, looking to help out in any small way he could.

“But for the families who join us, this is your anniversary of personal and permanent loss. It’s the day that has replayed in your memory a thousand times over,” he said.

“You waited, you prayed, you answered that most dreaded call, and your life changed forever. To each of you: The First Lady and I are united with you in grief. We come here in the knowledge that we cannot erase the pain or reverse the evil of that dark and wretched day, but we offer you all that we have: our unwavering loyalty, our undying devotion, and our eternal pledge that your loved ones will never, ever be forgotten.”

In the midst of the attack, the world also witnessed the awesome power of American strength and resolve. It could be seen in the perseverance of the brave first responders in both New York and at the Pentagon, as well as in the 40 passengers and crew aboard Flight 93.

One such hero was retired Army Colonel Rick Rescorla, who gave his own life to save many others. After a decorated military career serving in the Vietnam War, Rick went on to become the Vice President for Security at Morgan Stanley in the World Trade Center. On September 11, Rick died while leading people in the South Tower to safety.

“The future of our nation is secured through the vigilance of our people: The brave men and women who tore through the gates of hell to save the hurt and the wounded . . . Each of your lives tells the story of courage and character, virtue and valor, resilience and resolve, loyalty and love,” the President said.

“This morning, we make a sacred vow to carry on this noble legacy.”

President Trump:On 9/11, “the world witnessed the power of American defiance”     Photo of the Day   Official White House Photo by Andrea Hanks   President Donald J. Trump and First Lady Melania Trump, joined by members of the White House staff, observe a moment of silence on the South Lawn in remembrance of September 11, 2001 | September 11, 2019