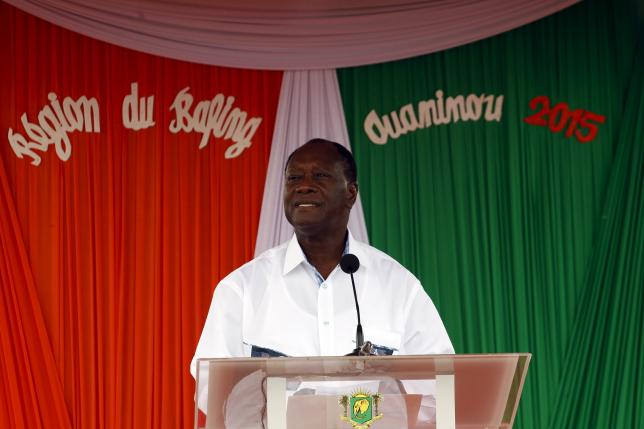 Ivory Coast’s government on Wednesday fixed Oct. 25 as the date for a presidential election considered an important step toward overcoming a decade of political turmoil and civil war.

« This election is important for our country, for our democratic process, to turn the page on the crisis, » he said after submitting his paperwork. « I want this election to be peaceful and for the results to be accepted by everyone. »

More than 3,000 people were killed in a brief war that broke out after incumbent president Laurent Gbagbo refused to recognize his defeat to Ouattara in the last presidential election in 2010.

Gbagbo was eventually captured by rebels backing Ouattara and is now awaiting trial before the International Criminal Court in The Hague for crimes against humanity.

As president, Ouattara has overseen a rapid post-war economic revival that has seen the economy, French-speaking West Africa’s largest, record some of the continent’s highest growth rates over the past three years.

Investors have taken notice but analysts believe many are waiting to see if this year’s polls will remain peaceful before taking the plunge in Ivory Coast, the world’s top cocoa grower.

The announcement of the election date followed a cabinet meeting in the commercial capital Abidjan.

Ivory Coast’s last presidential election was delayed five years amid a political crisis that divided the country between a rebel-held north and government-controlled south.

Ouattara is heavily favored to win a second five-year term in office, having already secured the support of his main coalition partner, the Democratic Party of Ivory Coast (PDCI).

A poll released by the Washington-based International Republican Institute in June found that 77 percent of respondents approved of the job being done by his office, and two-thirds said the country was heading in the right direction.

However, Ouattara has come under criticism from human rights groups and some war victims who accuse him of failing to foster reconciliation and even-handed post-war justice.

He is expected to face his main challenges from Pascal Affi N’Guessan, who heads Gbagbo’s Ivorian Patriotic Front (FPI), and from the National Coalition for Change, a new bloc composed largely of PDCI dissidents and a faction of FPI hardliners.