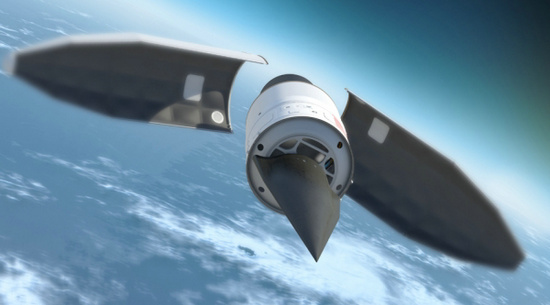 The ultra-fast maneuvering strike weapon known as the DF-ZF hypersonic glide vehicle was launched atop a ballistic missile fired from the Wuzhai missile test center in central China’s Shanxi Province, according defense officials.

The vehicle separated from its launcher near the edge of the atmosphere and then glided to an impact range several thousand miles away in western China, said officials familiar with details of the test.

The DF-ZF flight was tracked by U.S. intelligence agencies and flew at speeds beyond Mach 5, or five times the speed of sound.

It was the sixth time the hypersonic glider has been flight tested since last year.

The website China Spaceflight reported Sunday that the test would take place, based on the Chinese government announcement of airspace closures along what would ultimately become the zone used by the glide vehicle during the flight test. The website reported that the airspace restrictions were similar to closures announced prior to an August DF-ZF flight test.

China’s most recent DF-ZF test took place Aug. 19, also from Wuzhai, and like Monday’s flight test was judged a success.

U.S. intelligence agencies have assessed the DF-ZF to be a nuclear delivery vehicle for Chinese missiles, with maneuverability and high speeds that would allow it to defeat U.S. missile defenses, currently designed to counter non-maneuvering warheads with more easily-tracked ballistic trajectories.

China also could use the DF-ZF for conventional-armed rapid global strike capability, according to military specialists.

The high rate of testing for the glide vehicle is an indication China has placed a high priority on the weapon program and that it is making rapid progress.

“As I look at that [hypersonic] threat, clearly the mobility, the flight profile, those kinds of things are things we have to keep in mind and be able to address across that full kill chain,” Cecil Haney said in an interview in July, using the military term for the process used to target and attack enemy missiles.

“It offers a number of different ways to overcome defenses, whether those are conventional, or if someone would decide to use a nuclear warhead, I think gives it an even more complicated dimension,” Kowalski said.

Currently, no nation has deployed hypersonic weapons but “it remains something that concerns us,” Kowalski added.

The Mach 5 to Mach 10 speeds allow the arms to “strike any target on earth in under an hour,” it stated.

“The very high speeds of these weapons, combined with their maneuverability and ability to travel at lower, radar-evading altitudes, would make them far less vulnerable than existing missiles to current missile defenses,” the report said.

The report said China’s hypersonic weapons, as well as the use of multiple-warhead missiles, are part of China’s efforts to assure its missiles can penetrate U.S. missile defenses.

“Alternatively, China may intend its hypersonic program for both nuclear and conventional purposes, or may simply be following the United States in pushing the technological frontier and is not yet certain which it will pursue,” the report said.

China is among three nations that are developing hypersonic arms, along with Russia and the United States.

Fisher said analysis of Chinese solid fueled space launchers indicates the new Kuaizhou-2 launcher could be used with China’s anti-satellite missiles and also could boost the DF-ZF to intercontinental ranges.

China also is building and deploying sophisticated surveillance satellites that could be used for the precision global strike weapons.

With some 138 satellites in space by 2030, “this means that an intercontinental [Prompt Global Strike] launched from China against U.S. targets could benefit from multiple target location updates,” he said.

Since China has refused to negotiate limits on its strategic weapons and remains highly secretive about all its arms programs, “the safe course for Washington would be to avoid any further delay in developing its own Prompt Global Strike capability to deploy if China does the same.”