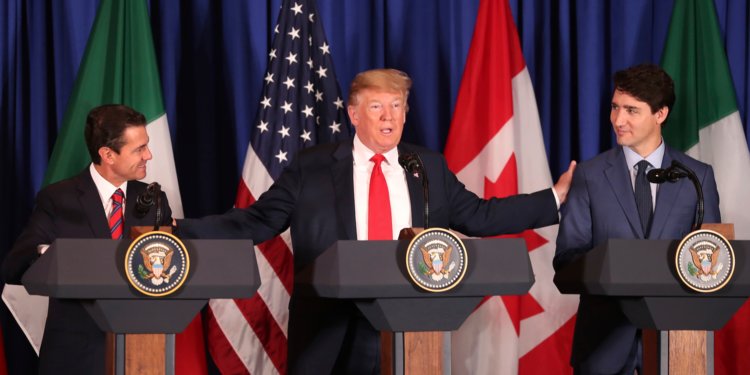 Just like the unseen parts used to make automobiles and airplanes work, the contributions of the Keystone State are often experienced — even if not always seen — every day around the world. The products manufactured in Pennsylvania help make the world function, but all of that could slow down if a critical trade agreement with our North American neighbors is not approved by Congress.

This is why, as president of Foerster Instruments, a manufacturer of equipment for the nondestructive testing of materials and components, I joined manufacturers from around the country in Washington last week to tell lawmakers how important it is to support and ratify the United States-Mexico-Canada trade agreement.

According to the National Association of Manufacturers, more than 40,000 manufacturing jobs in Pennsylvania depend on manufacturing exports to Canada and Mexico. Of the more than 3,000 Pennsylvania manufacturers that export products to Canada and Mexico, 80% of them are small- and medium-sized companies. Pennsylvania’s small- and medium sized businesses benefit in many ways from the tariff-free trade made possible by the North American Free Trade Agreement (NAFTA), and that’s true in different sectors of our economy.

Consider, for instance, that small- and medium-sized businesses make up nearly three-quarters of the state’s exports of chemical and electrical equipment to Canada and Mexico — and that Pennsylvania’s chemical and electrical equipment exports to Canada and Mexico have increased by more than 60% over the last decade under the current NAFTA framework.

But NAFTA is now more than 25 years old and in need of an update. That’s why the leaders of the U.S., Canada and Mexico negotiated a new and modern agreement to replace it. Soon it will be submitted to Congress for a vote. That new agreement is the USMCA, and companies like mine are counting on Congress to pass it.

I had the opportunity to meet with top lawmakers and explain the importance of tariff-free trade to my business and how the USMCA would build on previous trade deals and provide less onerous requirements to ship manufactured goods to our North American neighbors. I let them know how many of the products we make are shipped to customers in Canada and Mexico.

I also explained that, without tariff-free trade across North America protected by a strong trade agreement, our state’s manufactured exports to Canada and Mexico could be hit with as much as $1.7 billion in extra taxes. Costs like that are enough to devastate any business. As a result, many of Pennsylvania’s manufacturers and the workers and communities they support would lose sales as competitors from Europe and Asia swoop in on our missed opportunity, steal our business and, along with it, the American dream. We can’t let that happen.

We need to cut the red tape and the arduous regulations that make it harder to do business. The USMCA does this for small manufacturers. If the USMCA is ratified, businesses like mine will be able to continue doing what we do best: create highly sophisticated components and provide constant innovations in products to our global customers. That’s good for Pennsylvania and it’s good for our country.

I hope you will join me in urging our lawmakers to support this vital agreement and ratify it when it comes to a vote this year.

Contribution by Mr LEW KODAK, Former SPEAKER Of The MICHIGAN HOUSE OF REPRESENTATIVES

Over the past week, there are been positive developments with the modernization of the North American Free Trade Agreement (NAFTA), but unfortunately the United States was not a part of them. Mexico has officially ratified the United States-Mexico-Canada Agreement (USMCA) and Canadian Prime Minister Justin Trudeau met with President Donald Trump and congressional leaders to lobby for the swift passage of the deal.

The USMCA is vital for farmers and businesses of all sizes across Michigan, and we need our Representatives in D.C. to urge Speaker Nancy Pelosi to bring this to a vote this summer so that we can begin to experience the benefits of this modernized trade deal.

This should not be seen as a partisan issue, every member of Congress represents business owners who will benefit from the USMCA. Congressmen ought to advocate strongly for this agreement.

As the former speaker of the House here in Michigan, I have seen how important our economic relationship is with Mexico and Canada. So many of our businesses rely on the markets in those countries across nearly all industries. In 2017, we exported over $37 billion worth of goods and services to Mexico and Canada. While a large percentage of that trade is represented by the auto industry, this deal is also critically important for farmers.

I have been involved with the farming industry my entire life. As time goes on, access to international markets have become more and more important. In Michigan, 22,800 jobs are supported by agricultural trade with Mexico and Canada, which amounts to nearly $3 billion in exports annually.

At a time when trade wars are the norm and it is hard to keep the doors open for family farmers across the country, the USMCA represents optimism for our hard working farmers. It will strengthen our fruitful partnership with our neighbors to the north and south and will undoubtedly increase agricultural trade.

Our representatives need to listen to all of the businesses that are pushing for the USMCA and get this deal done. There is no state more reliant on trade than Michigan. Global trade supports 1.1 million jobs across the state, and trade with Canada and Mexico supports 338,300 jobs in Michigan. Our business owners and workers will suffer the most if the administration pulls out of NAFTA and the USMCA is not passed.

Both Mexico and Canada recognize the importance of our trilateral relationship. Trade between our nations boomed under NAFTA, and now we must protect it. Our elected officials cannot play games with our trading relationships. Their constituents are eager to see the USMCA ratified this summer. Congress needs to get to work and come together to deliver for the businesses and workers across the country. There is no excuse for the delay; pass USMCA as soon as possible.