US K1FO NEWS : PRESIDENT TRUMP AT THE BEDSIDE OF THE SURVIVORS At DAYTON and EL PASO 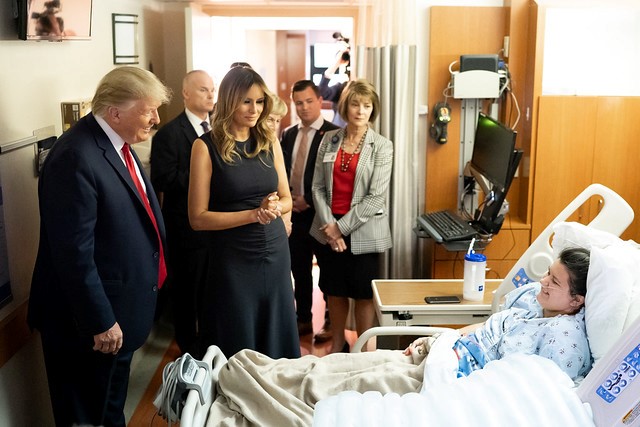 US K1FO NEWS : PRESIDENT TRUMP AT THE BEDSIDE OF THE SURVIVORS At DAYTON and EL PASO

PRESIDENT DONALD J. TRUMP AND FIRST LADY MELANIA TRUMP met Wednesday with some of the dozens wounded or injured in the weekend mass shootings in Ohio and Texas that left 31 dead.

“You had God watching. I want you to know we’re with you all the way,” the president told survivors of the Dayton shooting, where nine died, Grisham said.

Ohio Gov. Mike DeWine, a Republican, and Dayton Mayor Nan Whaley, a Democrat, were among those who greeted Trump on the tarmac when Air Force One landed just east of Dayton at Wright-Patterson Air Force Base. Sen. Sherrod Brown, D-Ohio, also attended.

Among protest signs in Dayton was one reading “Red Flag Is Dystopic Future,” according to a White House press pool report.

Grisham said the presidential visit was not a photo op, in explaining why there was not media access as the Trumps went  through the hospital.

However, the White House released photos of Trump greeting patients.

Police said a 21-year-old gunman fatally shot 22 and wounded or injured 24 others Saturday at a Walmart in El Paso, Texas.

Within 13 hours, police said a 24-year-old shooter killed nine and injured or wounded 27 others early Sunday in a nightlife section of Dayton, Ohio.

The Texas shooter surrendered to police. The Ohio shooter was killed by police before he entered a crowded bar.

Trump was in the Dayton hospital for more than 30 minutes before departing to head to El Paso.

He tweeted in flight.

While in El Paso, the president and first lady visited with first responders and hospital staff as well as victims and their families at the University Medical Center of El Paso.

Trump held a press gaggle Wednesday morning before leaving the White House, where he talked about gun legislation.

“Background checks are important. I don’t want to put guns into the hands of mentally unstable people or people with rage or a sick people,” Trump told reporters.

In response to a question about “assault” weapons, which is what critics call semi-automatic rifles, Trump didn’t seem opposed. But he also said he didn’t think Congress would support it.

“There’s no political appetite from the standpoint of a legislature,” Trump said. “But I will certainly bring that up.”

Trump also said he could convince Congress to take action.

The sister of an El Paso victim blasted Democratic politicians for politicizing the shootings, The Daily Caller News Foundation reported.

Andre and Jordan Anchondo died in the Walmart while shielding their infant child from bullets. On Facebook, Andre’s sister Vibora Anchondo called Democratic politicians in Texas “pure evil” for turning the shooting “into a political issue.”

“It’s such a shame that two of our local politicians (I refuse to say their names as they don’t deserve it) are saying that our President is not welcome on Wednesday,” Anchondo wrote. “I cannot believe how these monsters are using the tragic event to push their political agenda.”