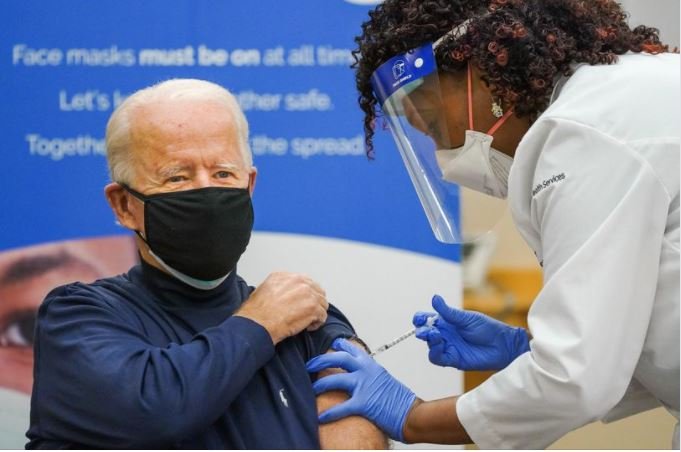 THE REAL NEWS FROM US

In recent days, President Biden has called for a « pause » in the J&J vaccination campaign because of its blood consequences. In Europe, AstraZenecca is not bulletproof, in that it does not stand the test of complete safety for those treated with it. Are our vaccines immune to error?

For the regulation of fear of the virus, the vaccine is of course responsible, but what if people are increasingly disappointed with the vaccine? What if the President himself is disappointed with the vaccine, so much so that he is pushing for a pause in its national release? Will this lead to a global contraction in the use of J&J’s vaccine? Will the AstraZenecca vaccine be marginalized too by its own margin of error?

Here, we are not talking about internet theses that question the usefulness of vaccines, but about the effectiveness of vaccines. Just as some might say that the slowing down of the vaccination campaign is evidence of their internal dangerousness, someone might argue that the regulation of the vaccination campaign according to their results and consequences is evidence of the search for the common good.

Of course, this is not a condemnation of the vaccine in general, but of specific vaccines, and the federal strategy is for a welcome adjustment in the effects of the vaccine on the treated population.

The issue is that people who are now suffering from health problems did not suffer from those problems before the vaccine treatment, which can lead to grief and legal problems. Who is responsible? Can there be compensation and who will pay for it? The pharmaceutical companies, the federal government, the states, the WHO, the UN? These questions should be addressed quickly, and well, before people start to get suspicious thinking that the poison was the cure.

In fact, our reflection is about care, about trust and about potential litigation in case of medical malpractice. Can we consider failed vaccines to be medical errors? Should we trust vaccines with the lowest rate of adverse events, regardless of source or manufacturing process?

The talk below, by Ms. Dana Brooks, addresses the issue of medical error at the national level, and can be related to our current crisis. Hopefully, the health crisis, whether strong or widespread, will not lead to a real and serious crisis of confidence. If it does, we might, regardless of our political views, accept the government’s willingness to base its policies on facts rather than subjective prejudice.

It’s hard to learn from something you’re not studying

My law partners and I are amazed each year just how many people call our office seeking assistance with a medical malpractice claim.  In a community our size, in just our one law office, we receive an average of 1,000 calls annually.  Why is that?  Because we live in a litigious society? Or because medical malpractice is rampant?

A study published earlier this month in The BMJ, led by Dr. Martin Makary, a professor of surgery at the Johns Hopkins School of Medicine, found that medical errors are now the third leading cause of death in America, behind only heart disease and cancer and ahead of respiratory disease, accidents, stroke, and Alzheimer’s.  But is this really news?  In what was considered groundbreaking at the time, a 1999 report from the U.S. Institute of Medicine called preventable medical errors an “epidemic.”  So why are we still having this problem?  Maybe it’s because we are not investigating the causes and making those findings available to other healthcare providers.

It’s common to hear people compare deaths from medical malpractice to deaths from plane crashes. According to The BMJ study, 251,000 lives a year are lost to preventable medical errors.  That would be the equivalent of 418 jumbo jetliners crashing every year!  (The public outcry if we had at least one 600-passenger-plane crash each day is unfathomable.).  But when there is a plane crash, governmental agencies investigate the accident in concert with the private companies involved.  The crash investigation is made public and used within the industry to make air travel safer for everyone.

But this doesn’t happen with medical malpractice claims.  Quite the contrary.  In the past, the hospital might conduct a root cause analysis or investigate an “adverse incident.”  The investigation and findings would be kept strictly confidential within the institution and the lessons learned used mostly internally.  With the passage? of several pieces of “patient’s right to know” legislation making those internal investigations subject to production to the injured patient and the public, some suspect that instead of more transparency in healthcare, those laws have resulted in the investigations simply not being done.  You don’t have to turn over the results of an investigation that never happened.

Another lost source of information comes from how little we gain from what is listed as the cause of death in the United States.  The Centers for Disease Control (CDC) gathers data on causes of death based on International Classification of Disease (ICD) codes.  That data informs decisions about how we allocate research dollars in studying disease, yet the CDC does not require reporting of deaths caused by medical malpractice.  That is because there is no such ICD code for deaths caused by preventable medical errors.  That’s right – the third leading cause of death in America can’t even be listed on a death certificate.

It’s hard to learn from something you’re not studying.

Everyone in America has been touched by heart disease or cancer.  We have organized fundraisers and 5k runs to promote awareness of everything from ALS to tinea versicolor.  Still none of us wear a “Preventable Medical Error” ribbon or rubber bracelet yet it is responsible for 10% of deaths in our country each year.  Without mandatory reporting of these deaths, we cannot begin to appreciate the magnitude of the problem and begin to treat the most treatable of all American diseases – human error.  And yes, this requires governmental oversight – with teeth – or the number of Americans who are, says Dr. Makary, “dying from the care that they receive rather than the disease for which they are seeking care,*” will continue to climb.

Dana Brooks is a shareholder at the law firm of Barrett, Fasig & Brooks. Brooks, a longtime advocate for social justice, is active in the legal and political communities, and is a board member at 211 of the Big Bend. Contact Brooks at Dana@tallahasseepersonalinjury.com.

TANZANIA : THE ‘BULLDOZER’ GOES OFF THE ROAD
K1FO NEWS : WE ALL STAND WITH TATARSTAN AND RUSSIA