US K1FO NEWS : GOALS AND RESULTS OF THE PLEDGE TO AMERICA’S WORKERS 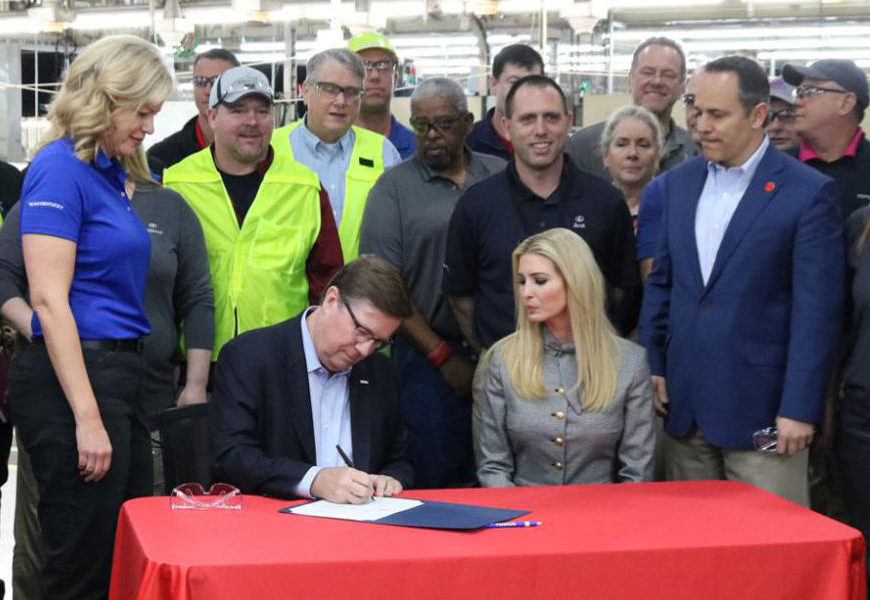 US K1FO NEWS : GOALS AND RESULTS OF THE PLEDGE TO AMERICA’S WORKERS

In July 2018 President Trump established the President’s National Council for the American Worker and launched the Pledge to America’s Workers. The program signed on more than 20 companies and business groups, which committed to hire or train more than 3.8 million workers over the next five years. One year later, over 300 companies and organizations have joined the pledge to bring the total to over 12 million new training opportunities for students and workers over the next five years, according to the White House.

Among those who signed the pledge: Walmart, Microsoft, FedEx, Lockheed Martin, AT&T, the National Retail Federation and Associated Builders and Contractors.

The impetus for the initiative is the well-known skills gap in today’s labor force. With roughly 1.3 open jobs for each unemployed worker, employers are having a hard time filling positions.

As many as 83% of employers reported difficulty finding workers with the right skills. And according to American Action Forum (AAF), a center-right think tank, the skills gap will end up costing the U.S. economy $1.2 trillion over the next 10 years.

“It’s true that there’s been a need to really kick some employers in the pants, basically, or politely get them to volunteer to do more. You can’t fix the skills gap, you can’t train workers for jobs unless you involve the people who are going to hire them,” Tamar Jacoby, president of Opportunity America, a think tank focused on economic mobility.

The tight labor market has, indeed, forced employers’ hands. Many of the companies that signed the pledge had already begun training workers to meet their business needs. “Employers might have been reticent before to [train workers] because it’s spending money on something, and employers want to avoid that where they can,” says Tara Sinclair, George Washington University professor and economist at Indeed.com.

Yahoo Finance looked into what a handful of companies that signed the Pledge to America’s Workers have been doing to bridge their own workers’ skills gap.

Lockheed Martin (LMT) is the prime contractor building NASA’s Orion, the spacecraft designed for deep space exploration. The company – as well as others – is working in partnership with NASA to deliver on Trump’s space exploration goals.

At the time it signed onto the president’s pledge, the aerospace giant announced it’s investing $5 million in vocational and trade programs and pledged to create 8,000 new jobs for skilled workers over the next five years. Expanding the advanced manufacturing technician apprenticeship program (AMTAP) is a key part of Lockheed Martin’s five-year pledge. This program, which has no experience requirement for applicants, offers a five-week paid certification program – candidates finish “with the skills to build electronics hardware.” At the conclusion of the program, successful candidates have the chance for employment in Lockheed Martin’s space program.

Ivanka Trump, the president’s daughter, advisor and co-chair of the American Workforce Policy Advisory Board leading the initiative, visited Lockheed Martin’s Denver space facility in July. “Through Lockheed Martin’s Pledge to America’s Workers commitment, and the booming American space industry, we are at the forefront of the changing nature of work, from the use of artificial intelligence to advanced manufacturing,” Ivanka Trump said.