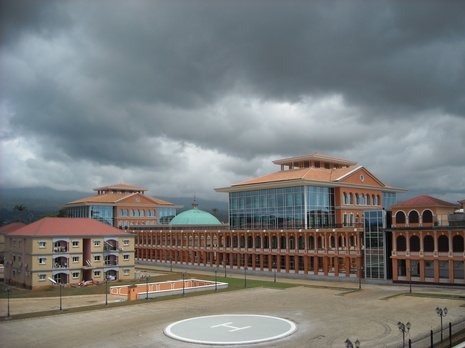 TRANSAFRIKHA by HGOAH, and K1FO supports Equatorial Guinea and H.E Teodoro NGUEMA OBIANG MANGUE, Vice-President of Equatorial Guinea and Global Official Representative of TRANSAFRIKHA against the undiplomatic destabilization attempts himself and his country are confronted with from France and United Kingdom, in the form of assets and funds seizing and other economic sanctions.

While we are respectful of the functionning of justice in sovereign countries, we can only ask for the respect of every nation sovereignty, towards foreign procedures and political attacks.

We should also ask where do the seized assets really go and how could they help African continent as the TRANSAFRIKHA System promoted by H.E Teodoro NGUEMA OBIANG MANGUE does?

TRANSAFRIKHA is also concerned by the violation of Equatorial Guinea aerial space by a French military reconnaissance helicopter. TRANSAFRIKHA, a French-born project conceived by Mr GNADOU DANO ZADY, Chairman of HGOAH, congratulates French Ambassador for Equatorial Guinea Olivier BROCHENIN for having recognized the error, and facilitated the liberation of the six French military officers held by the Equatoguinean authorities.

Our priority is the reconciliation between France and Equatorial Guinea, for mutual transcontinental partnership. We can also only wish for a normalization of Equatoguinean-British bilateral relations. TRANSAFRIKHA needs all capabilities and potentialities, from all global forces and partners.

TRANSAFRIKHA and HGOAH Group send their strongest supports for Equatorial Guinea Government in these harsh times:

It is in the storms that the great navigators reveal themselves.